I would like to let the running world know how I felt yesterday on my long training run 18 miles. My training friends'  average age is 23-35 and I'm their motivation to stay on pace. We averaged 7:00 -7:20 per miles during the run. I know that sleeping at altitude gives me an edge...  I definitely see a huge improvement, especially in the second half of a race.
- Christine Kennedy
60-year old age group record holder in 10K
Sub-3:00 hour marathon at age 59 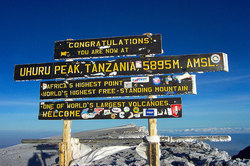 Wanted to let you know that of our team of 8, I had zero altitude issues—no headache, shortness of breath, or other AMS--even at the summit of Kilimanjaro hiking to Uhuru Peak.  Most of the rest of the team either had to go on Diamox or suffered headaches/altitude shortness of breath and had to head down fairly quickly. It was almost certainly a result of the Higher Peak altitude tent training.
-C.S.
My hematocrit normally ranges from 35-39, but since I starting altitude training, it has increased to 46, up about 20%. My power numbers improved by 15%. At my level, increasing even 2 to 3% would be considered exceptional. I can drill out high-intensity interval training one after another, I'm glad for the hypoxic training that I am doing. It really does make a difference and why so many top athletes in all sports are doing it. You would be amazed at who and how many.
-Larry Zimich
Masters U.C.I. World Cup Hill Climb Champion

I am a 2006 Winter Olympian in biathlon and am a five-time National Champion. I am just lucky to see huge jumps in performance and blood values with altitude training.  We have our World Championships in Northern Italy next season which sits at a fairly high altitude, I want to be fully prepared for these.
- Tim Burke, New York
US Biathalon, 2006 Winter Olympics, Turin
5-time US National Champion
Equine Athlete Broad Bahn wins $1.5 million Hambletonian (2011)
A custom high-altitude stall powered by six Mountain Air Generators helped Broad Bahn cut two seconds off his previous best time and win trotting's biggest prize.
...and congratulations to hundreds of other Higher Peak athletes -- including multiple Olympic champions, major marathon winners,  American and World record setters -- who prefer to keep their secret weapon quiet